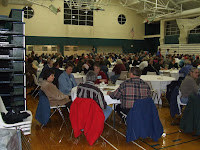 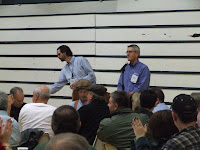 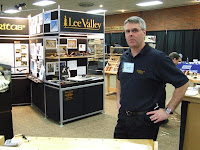 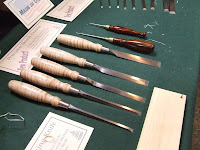 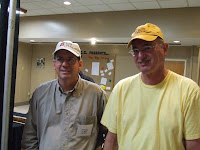 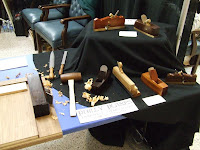 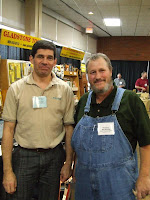 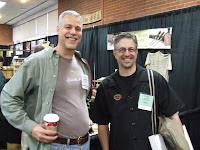 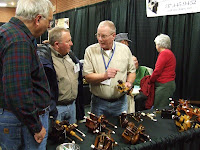 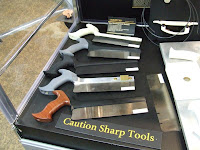 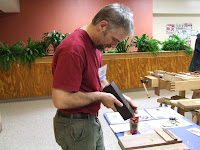 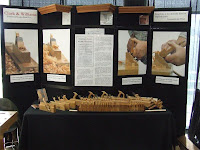 I had the honour of being invited to the above conference in Berea, Kentucky. It was a “hand tools only” event which featured the top toolmakers from around the world (plus myself). It also featured training sessions on various skills (sharpening, planing, etc) as well as Q+A sessions with tool manufacturers on different aspects of tool design and use. This was the first of this kind of event held in the US, and it sold out almost immediately to 300 lucky attendees.

There was a real buzz in the air on the first day as the eager attendees turned up early to get started. The second day we actually came to open up early as so many people turned up early to get in – a decision that hung-over exhibitors were overjoyed about ;) But it was an extremely enjoyable event – I never saw anyone who wasn’t wearing a silly grin throughout the whole three days of the event.

New Tools – Lee Valley had an interesting new dovetail saw on display featuring a very modern design. It feels very comfortable to use and I have one with me to play with – review ASAP. I also had a sneak preview of an exciting new plane from Veritas. I have been sworn to secrecy but can tell you this – it is breathtakingly pretty and I want one!!!!

Lie-Nielsen were also showing some new products – tongue and groove planes, a panel saw, hammers, corner chisels. I could never get close enough to take a picture but these lines should be available before Xmas.

One of the highlights of the show for me was the openness of all the exhibitors to talk and share - I spent way too much time chatting with Lee Valley crew (these guys know they have the best job in the world and it really shows!), Ron Brese, Bob K, Ron Hock, Adam Cherubini, Jim Leamy and, for me the highlight, Larry Williams and Don McConnell of Clark and Williams fame. As a wooden planemaker, to spend hours talking to these two extremely knowledgable, skilled and passionate men was worth the cost of making the trip – I was in plane heaven!

Chris Schwarz was seen hovering over the proceedings and was working incredibly hard to ensure the show was a success. I heard him say he had only 12 hours sleep over the three days, and I can believe it. Thanks for all your hard work Chris – it certainly was worth it and you should be proud.

John Hoffman of Lost Arts Press was often close by to ensure I had a beer in my hand and knew where the nearest Mexican restaurant was located – cheers John, look forward to the next time!

I also met a fair few of the Woodworking bloggers throughout the show like Matt (Matts Basement), Kari (Village Carpenter) and Mitch (furnitude). I fear there may be a few embarrassing photo’s hitting the web soon………

Finally, I would like to thank the Popular Woodworking crew for putting on such an excellent event and to all the staff and attendees for their warm, enthusiastic welcome – it was truly a pleasure.

Thanks for the report and some great pictures. Sounds like it was a fabulous event.

Great report! Best one on the web for those of us who could not attend.

Great report, seems like a fabulous event, wish I had been able to go.

Nice info. Always nice to read about happenings and new stuff. Here in NORWAY it is hard to get new things. Seems that I need to take a trip to the States next year.
I'll look you up guys.
Sincerely
Steinar
from Norway