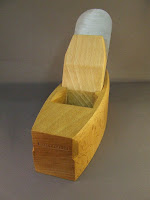 Apologies for the lack of blog entries lately - between building planes, playing with the band and taking a small holiday the month has disappeared!

First up - planes. Moving Fillisters are the current fave - I've shipped two and have a few more underway in a selection of timbers. Pics of some special planes coming soon!
I recently made a Coffin Smoother for Richard Maguire, maker of fine workbenches. He wanted the plane made with an early 18C style iron with the rounded top, which I was happy to oblige. If you would like your plane with a similar iron just let me know when you place the order - no extra charge for this. 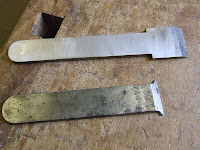 I've also been making plane irons for customers - see the photo of a replacement iron for an infill shoulder plane. The original iron has seen some serious use and was completely used up - I was able to make a replacement for the customer which gives his plane another lifetime of use. If you need a replacement iron for a special plane or if you are thinking of building your own plane then drop me an email - I can make you a high carbon steel blade to pretty much any dimension.

Finding a little spare time in the workshop isn't easy when you are trying to be self-disciplined, but I've managed to do a little work on some projects. I've started a Maloof style rocking chair, which is a project I've always wanted to attempt. While in the States the other month I was able to get my hands on a set of plans and a DVD - this set is now available from Classic Hand Tools in the UK. I've got the chairs seat made up and the main components cut out - this week I intend to get the leg joints cut so I can fit them to the seat. I'll get some photo's taken once it looks like a chair :)

Philly
Posted by Philly at 6:37 pm No comments: