Here we go, then. The completed plane.
Looks pretty good (IMHO) The chunky chamfers work well. And the weight balance is perfect. I made a skewed iron mitre plane as an experiment and it never felt right. But his one makes me happy - it feels right.
The iron is bedded at 33 degrees. Low enough to be noticeable compared to a standard bench plane but leaving enough wood for strength. And the monster iron is perfect in this instance. Chatter is NOT going to be an issue ;)
I've put more pics here..
Cheers
Philly
Posted by Philly at 6:58 pm 5 comments:

How Low Can You Go? 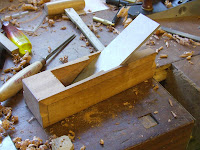 Spent some quality time in the workshop over the weekend. First task - Operation Cleanup!!
Took an hour and a half to get the place half decent but it was well worth it. There's nothing worse than a messy workshop - you can't get things done when you can't find anything :)
So with the workshop renewed I got started on some planes. First up, a plane for a Mate. Lots of headscratching and drawing on scrap and finally I get to resaw some Santos that I've been waiting to use. Lots of flattening and smoothing and the lot went in stick until I'm ready for the challenge.
Next up - a low angle plane. I'd been asked on a forum if it was possible to make a bench plane with a low angle - the feeling was that a wooden plane wouldn't be strong and the bed would collapse. So I did some research, and sure enough there were plenty of examples of low angle planes. Search for Box, Flogger and Miter planes.
Now, if you attempt a 12 degree bed in wood it is going to disintegrate. But that pitch was used in metal planes (and they used the iron bevel up, so when you work out the effective pitch they really weren't low angle planes anyway!) So I went for 33 degrees. That's a much stronger bed, and with the iron bevel down you get a real world 33 degree plane.
I've has some 6mm tool steel lying around - it's pretty OTT for a plane. But I thought it would be perfect for this plane, so out with the hacksaw. And it adds a real heft to the plane - its a heavy iron!
So I'll hopefully have this one finished soon and I'm looking forward to testing it out.
Stay tuned,
Philly
Posted by Philly at 7:36 am 4 comments: 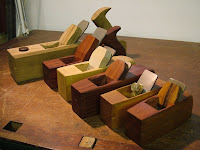 HI Folks
I'm preparing to make the hike north to Nottingham today (with good friend Waka at the wheel) for Steve M's UK Workshop Bash. The rain is dropping from the sky like a river so I assume we won't be having a BBQ in the garden ;)
For me, the most enjoyable part of these get-togethers is meeting other members and having a chat. It is so much easier "in the flesh" than typing away :)
So if you are considering coming along tomorrow - please do! I'm packing a load of planes and other goodies for all to try.
See you there,
Philly
Posted by Philly at 7:56 am No comments:

I was pleased to hear that my little video clips were well received - more are planned. So if there are any topics you want covered let me know!
I was also very flattered to have my "adjusting wooden planes clip" chosen for Fine Woodworkings "Gluetube" video page. Fame at last?
The replacement camera arrives today - I really miss my digital camera.
This weekend is the woodworking Bash at Steve Maskery's workshop in Nottingham. I am really looking forward to meeting up with some old chums and putting "faces to names" :)
Cheers
Philly
Posted by Philly at 6:04 am 1 comment:

Nooo........my camera has stopped working!!!!!
I took it to work to take some shots of my latest kitchen refit and nothing happened. Flat batteries I assumed.
Charged the batteries overnight, popped them back in. Ziltch. Nada.
Fitted some new alkaline batteries just to be sure my rechargables hadn't died. Nope.
So my latest video, "Make a plane iron", has to wait until I get my camera repaired (or replaced).
Grrrrr..........:(
Philly
Posted by Philly at 7:20 pm 2 comments:

HI Folks
I've finally moved into the "video age". My first two video clips are on-line at my website.
They need a bit of polishing but I'm sure they will get better the more I do.
If you have any suggestions for a video clip (woodwork related, please!) then let me know.
Cheers
Philly
Posted by Philly at 9:52 am No comments:

Alright, so I changed my mind! The skew mortise was too inaccurate and I was spending too much time fitting the wedge. So my brain kept pushing the lamination idea...........weak, so weak ;)
And here we are - Dado Plane MKII. Made from Goncalo Alves (my fave planemaking wood) it works like a dream. The lamination method lets you easily make clean and accurate mortises. As for strength, I honestly can't see it being a problem. None of my planes has exhibited any signs of weakness along the glue lines - a good sign!
As a special treat (you may disagree....) I made a small (and pretty terrible) video of the plane in action. Have a look here... I feel the WMV version is better.
Needless to say, I will be doing some work on my videomaking. Stay tuned.........
Cheers
Philly
Posted by Philly at 6:48 pm 4 comments: