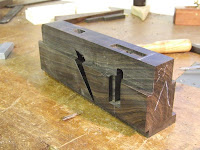 Working on a Moving Fillister for a customer at the moment. African Blackwood was the timber choice (after seeing my Blackwood Skew Miter at WIA). I love the look of Blackwood - stunning figure and that "almost Ebony" colour. But it is seriously tough to work with. I reminds me more of stone than wood, chipping away bit by bit. And the weight - well, it's almost as dense as stone. Quite a shock the first time you pick a piece up ;)

But the plane is progressing well - spent yesterday making the metalwork. There's a fair bit involved, too - two blades, brass depth stop, depth stop cover and knurled brass knob. And the fence bolts and washers. Just got some wedge fitting left to do and then I can start polishing the beasty up - I think its going to be something special :)
Cheers 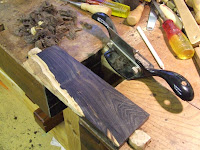 HI Folks
Been working with African Blackwood again this week. It is an amazingly dense timber (and I'm sure it smells like liquorice - but that might be an illusion) and has amazing grain. And its black!
The downside is that it is a difficult timber to work. Very!
To plane this without tear-out can be very taxing. I use a plane with a 60 degree pitch and sharpen the blade often to ensure the best possible cut. But even then, some areas just don't want to play. So out comes the scraper.
I have a humble #80 (tuned up with a Hock blade) and it doesn't see a lot of use. But when you are backed into a corner it usually saves the day. It tamed this piece of Blackwood without raising a sweat.
Only downside with the #80 is its short (read tiny!) sole. Guess I should add a scraper plane to my list of "Must Build" plane projects.
Cheers 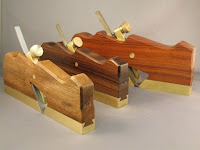 Yet another Shoulder plane leaves the 'Shop today. This one, destined for the Netherlands, is made from London Plane. I managed to get a group shot before it left - nice, huh?
I do enjoy working with brass - it's soft enough not to cause too much sweat on the brow and polishes up a dream.

The next few planes on the bench are to be made from African Blackwood, an amazing timber. Better get that plane iron sharpened before I get stuck into stock preparation ;) 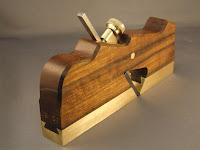 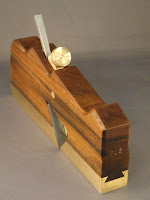 Hi Folks
Here's one of my brass soled shoulder planes - this one from Ovangkol, a favourite timber of mine. It's once inch wide with a 55 degree bed.
I've made a few rebate and shoulder planes out of just wood (o.k, I used metal for the blade.......). But the brass sole adds significant weight and this really helps in the work this plane is designed to do. After setting this plane up I was able to take fantastic end grain shavings from maple with no hassle - no mean feat.

This week has also seen more left handed planes being built. I have to constantly remind myself to check (and then double check!) I'm making a cut in the right direction. I've also got exciting news on the new 2009 "Philly" name stamp. Pics soon..... ;)

Philly
Posted by Philly at 7:29 pm No comments:

I've been busy working on a new toted smoother design. It's something I've had on the "To Do" list for quite some time and a customer has been chasing me to get it done. So here's the prototype. 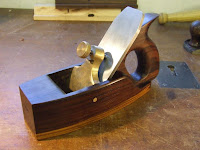 Rosewood with a lignum vitae sole (the production model will have a brass sole, attached in the trademark Philly style). 50mm wide, 6mm thick O1 iron with brass screw cap. Pitch is 55 degrees. Oil and shellac finish. I'm also putting finihsing touches on my version of the Norris adjuster which will be available as an option.

The plane feels very natural to use. The Lignum sole is "interesting" - it is slippery and lubricates itself making for a very slick action. But I think the additional mass a brass sole will add will make for a better smoother. 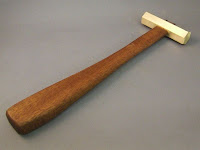 I've been asked if I make a hammer with a brass head instead of wood. This would be perfect for adjusting Infill and metal bodied planes to tweak the blade setting. So after much experimentation I present the Philly Brass Hammer. 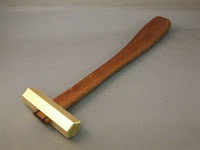 The head is 19mm hexagonal shaped brass and the handle is shaped from mahogany. The head is fixed to the handle with ebony wedges. Weight is approximately 230 grams. The handle is finished with a coat of boiled linseed oil and shellac. And they're available now over at www.phillyplanes.co.uk 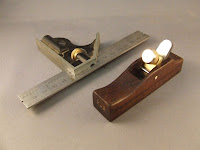 Hi Folks
Another plane I finished this week was a tiny little rosewood plane suitable for an instrument maker. It's only three inches long and has a half inch wide iron. It's definitely a "one hand" plane and perfect for getting into tight spaces.
It's amazing how much time it took to make (almost as long as a full size plane) - smaller doesn't necessarily mean quicker ;)
Cheers
Philly
Posted by Philly at 7:40 pm 3 comments: 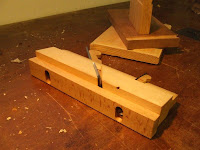 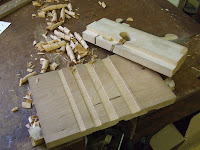 Been building a lot of "cross-grain" planes the last few weeks. Dado, Fillister and dovetail planes, to be precise. Plane that are designed to cut across the the grain have different needs to planes that are designed to cut along the grain.
First up is a skewed iron. This gives a slicing cut across the fibres and leaves a noticibly cleaner surface. It also makes a cool curly shaving, too ;) But the skewed iron rips the surface at either side of the cut - and badly! So this necessitates this second "cross-grain plane" feature....

The Nicker iron. This is placed ahead of the main iron and is situated on the outer edge of the plane (on a Fillister there is one, on a dado there are two). It slices the timber allows the plane to make clean, sharply defined cuts. Rather like scoring the workpiece with a marking knife.

The final feature is a fence. By having either a fixed or adjustable fence you define the width of cut the plane will make. And the skewed iron is usually set to pull the plane against the workpiece due to the cutting action. (Of course a dado plane, which cuts across the boards far from an edge, has no built-in fence. A batten is usually clamped across the workpiece to guide the plane).

So there you go - three features which allow a plane to make clean accurate cross grain cuts. They make a lot of extra work for the planemaker but the result is a unique plane.