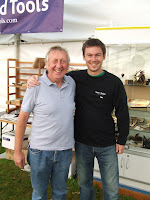 HI Folks
A little more about Westonbirt. On the Sunday we had the pleasure of meeting Bill Carter. Bill makes the most wonderful infills, mostly Miter planes. But with a difference. The majority of his planes are miniatures and he ages the metalwork to give an antique look. These give the planes an wonderful timeless look. He also makes a lot of his plane from recycled tenon saw backs - check out his website for more info. Bill was very happy to talk about how he makes his planes and I was fascinated by his methods. As a bonus, his wife Sarah makes a smashing sponge cake ;) Here's a photo of Bill with fellow planemaker Konrad Sauer.

It was good to see so many members of the UK Workshop forum over the four days. Here are a couple of random pics....not sure about the axe one ;) 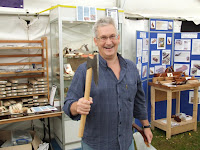 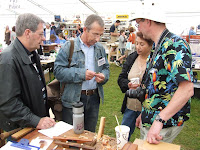 There were exhibitors from all around the world and it was great to socialise after hours. Here is a picture of Martin and Tommi from Magma - they are holding a Japanese plane they made during the show. A plane with a difference - not many have a walnut blade ;) Tommi (on the left) was also our star goalkeeper during the "International Soccer Match". 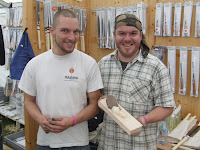 Quote"not many have a walnut blade"

So is that a cheese shaving cut with their plane?

I am please you guys had a good time, I really wanted to get there but things conspired against me. I am still planning to get to Yandles on the Friday.

You can tell by the grins on their faces those guys like a laugh :)
Be good to see you at Yandles, Dave!
Cheers
Philly

I do wish folk wouldn't wear such ghastly shirts at a show...do you know who that bloke was Phill?.... - Rob

Gee, Rob. Who could that of been? ;)
I believe his wife was wearing a matching abomination, too........
Cheers
Phil