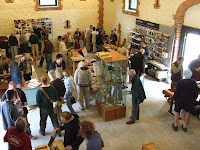 Hi Folks
Just about recovered after the Hand Tool event. It was a fantastic weekend and I hope everyone enjoyed it as much as I did. Highlights for me were having my bench next to planemakers Karl Holtey and Bill Carter - the chance to chat throughout the weekend with them both about plane related things was heaven! It was also interesting to compare their work - Mr Holteys planes are sheer perfection, every detail being spot on. Mr Carters planes on the other hand, while made to the same high standards, are aged to give a "vintage" appearance and could be mistaken for being pristine examples of classic infill planes.
The UK Workshop crew dropped by to say hello and it was good to meet customers who I previously only dealt with via email. David Charlesworth was also at the show, which was a special treat - I haven't seen David for almost a year so it was good to see him out and and about.
Last week I had a few emails from a Gent in Norway asking questions about planes and planemaking. It turned out that he was coming to the UK to attand a violin making course - I told him about the Hand Tool event and he managed to catch an earlier flight so he could attend the show before going off to his course. So say hello to Stig - I have a feeling he'll be turning up at my workshop in the near future ;) After getting home and unpacking the van I was pretty wiped out on Monday. So I spent some time cleaning the workshop - a perfect way to recharge my batteries! This week I've been making a trio of planes for an American customer from Beech, but with some interesting details - a smoother like the one featured in Moxon and a Jack with an off-set tote. I'll have some photo's for you later in the week .
Be good,
Philly
Posted by Philly at 6:26 pm

Yes, it was a great event, Phil, and nice to meet up again for a chat.